There was a member request for me to analyze Under Armour (UAA). Instead of analyzing UAA individually, I decided to analyze both Under Armour (UAA) & Nike (NKE) together. Sometimes I find it easier to analyze a stock chart when I have a comparable chart to bounce ideas back and forth between them.

I did the same thing in my previous update for Under Armour (UAA) & Nike (NKE). Here is the previous article.

Both stocks were in downtrends in that previous update and lower prices were still expected. Let's see if anything has changed for those stocks yet.

The downside price target that I have been monitoring for NKE was the $50 level. In the previous update, I had mentioned that I was unsure if the $50 level was going to hold though. NKE broke briefly below the $50 level and is now back above that price. This week's candlestick pattern is not looking good though for NKE.

When I apply my 3 volume spike theory, the three volume spikes are usually evenly spaced out. This theory would suggest that NKE's upcoming earnings report scheduled for March 1, 2017 will provide the necessary 3rd spike.

While NKE did reverse from the $48 area on above average buying volume at the end of October 2016, I still feel as I did in my previous article above. I think NKE has another stint below the $50 level. I see its price fading over the next several weeks until it gets closer to its next earnings report. This would also fit in with my sell-off that I am anticipating for stocks after the inauguration date for the new POTUS.

This is a 3 year weekly candlestick chart for Under Armour (UAA) class A shares. I've overlaid 2 different Fibonacci Extension Tools on its current downtrend. There is a confluence of Target Lines around the $25 price level. This is the same level that I talked about in the previous article for UA that is linked above. UAA's share price was $38.99 at the time of the previous article.

With the lack of a capitulating volume spike to finish the downtrend, there is still downside risk before the downtrend is over. The confluence of the Fibonacci Extension Tools around the $25 area is the most likely target still. I sketched out a Bearish Impulse wave pattern on how I think UAA will get down to those levels.

The bullish divergence that is setting up indicates that the bottom could be very near though. With UAA's next earnings report on January 31, 2017, I think that the volume spike we are looking for is around the corner.

A bullish divergence is when the share price is still falling, but the selling volume is decreasing. The decreasing selling pressure is confirmed by a MACD Histogram that shows slowing selling momentum, as UAA's does.

One final note for UAA. The long, ugly looking red candlestick that developed the week of October 24, 2016 probably represents the middle of that downtrend for UA that started at the $45 level. The largest volume spikes tend to happen at the beginning, middle and end of downtrends.

The most important thing an investor can do is make sure that an actual reversal is taking place. I do not see the reversal signs just yet. But there are "hints" that the downtrends are close to over for both stocks.

Remember that the above are guides, not absolutes. I always recommend using a scale-in strategy when entering into a new position. That applies to purchases for both Under Armor (UAA) & Nike (NKE).

Let's perform a post-chart analysis for Starbucks (SBUX) after its[...] 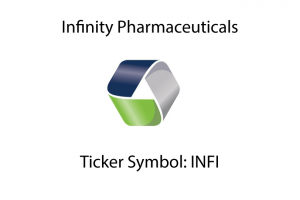 Infinity Pharmaceuticals (INFI) Stock Chart Review As requested by a[...]